At WWDC 2014, Apple announced new features for iOS and OS X. These are my thoughts: 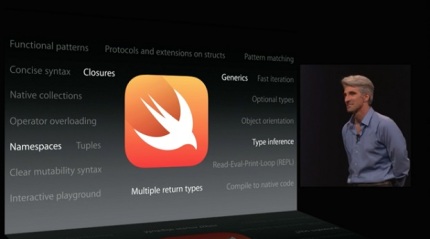 Swift is a new programming language by Apple.

Swift, on the other hand, has a more conventional design. You can read Swift code the same way you can read C# code, even if you are not a Swift or C# developer.

Swift is a compiled language, although it looks like an scripting language. It is strongly typed, it is object-oriented with functional features. It does not have garbage collection. It uses ARC instead.

You can call any Objective-C API from Swift (at least Apple’s APIs) , and Apple claims it is faster than Objective-C. Objective-C wasn’t the fastest language out there, but it wasn’t particularly slow either.

Perhaps the killer feature for me is Playground, a kind of sandbox for testing ideas / rapid development / rapid prototyping. BTW, Playground seems to be inspired (or copied if you prefer) from Bret Victor’s Inventing on Principle talk, which is a MUST WATCH video for everybody.

Also, Swift has pretty much what John Siracusa asked for in his Copland 2010 article.

So, if Swift is easier to learn, easier to master, less error-prone, faster to develop code, performs better than Objective-C and you can call Objective-C code from it, why Apple should keep adding features to Objective-C ? 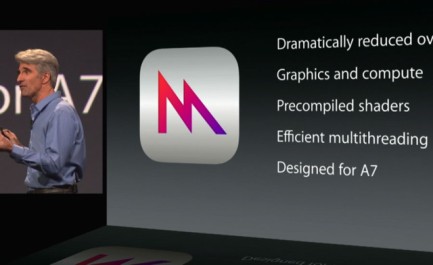 Metal is an API that lets you talk to the GPU in a more direct (but non cross-platform) way than OpenGL.

Apple claims that it is 10x faster than OpenGL ES when drawing, although I usually take those numbers with grain of salt. Don’t get me wrong, Metal probably is much faster than OpenGL ES, and a 3X would already be compelling reason to support Metal… it is just that the numbers presented at the Keynote are not always very accurate. 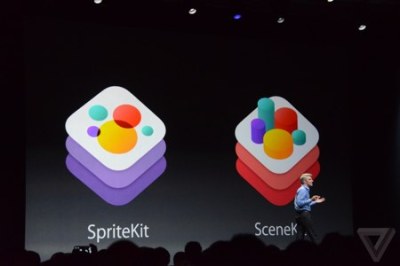 SpriteKit was introduced at WWDC 13. It is a clone of cocos2d with some nice improvements. And SceneKit is a 3d renderer. It has been in OS X for while, but it will included in iOS8 too.

SpriteKit and SceneKit seems to be Apple’s bet for creating casual / mid-core games. And with Swift, they are a great combination… assuming that you are interested on iOS only.

If you are interested in developing casual/mid-core multi-platform games, you should try something like cocos2d-x, of course 🙂 Recently we started adding 3d features: in v3.1 we added Sprite3D, in v3.2 we will add 3d animations, and in v3.3 we will add lights and other effects.